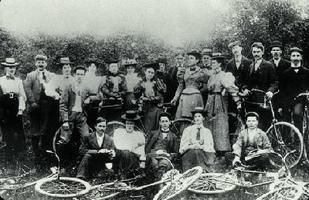 Bicycling was especially significant for women as it represented a new independence. Young women could go riding with men without a chaperone (courtesy Metropolitan Toronto Library). 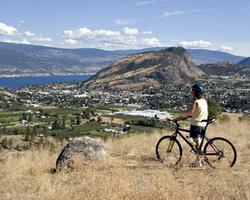 A recreational cyclist enjoys the view atop picturesque Cartwright Mountain near Summerland, BC (courtesy District of Summerland).
PreviousNext

The familiar 2-wheel, human-powered bicycle and its 3-wheel, tandem and oddly shaped modern variations represent the design culmination of a largely 19th-century progression from the pedal-less hobby horse and unwieldy "boneshaker," to the improbable high wheel, and eventually the contemporary-styled safety. Of these stages, the first to appear in Canada was the usually homemade, 2-wheeled boneshaker, so named because of the uncharitable ride afforded by its heavy wooden or iron form on generally unpaved roads. This machine, distinguished by pedals attached directly to the front wheel, appeared in the Maritimes in 1866, though its popularity awaited a N America-wide craze in 1869.

Velocipede rinks were built from Halifax to Toronto and rented bicycles and lessons were provided. There was an exhibition of riding that year in the Mechanics Hall in St John's, Nfld, and cyclists in Victoria, BC, held races in Beacon Hill Park. In the same year the brothers Michael and John Goodwin of Stratford, Ont, started a company which built iron bicycles.

The fad was short-lived, and its next manifestation was the display at the 1876 Philadelphia Centennial Exposition of the high wheel, or penny farthing, so named because of the alignment of its 2 wheels, one of upwards to 60 inches (152.4 cm) in diameter and the other a maximum-sized wheel of 18 inches (45.7 cm), usually in the rear for balance. By the 1880s the high wheel and its patrons were a publicly recognized elite whose exploits were recorded in the daily newspapers. The difficulty of riding such a machine, together with a $300 cost, narrowed participation to a largely youthful, male, professionally employed class of riders.

The first Canadian club was formed in Montréal in 1878, and 3 years later a gathering of riders in London, Ont, first discussed a national organization which was eventually constituted as the Canadian Wheelmen's Assn a year later. By 1883 Winnipeg had its own club, and at its inauguration in 1892 the Calgary Bicycle Club numbered 22 members, though women were accepted only as honorary members.

The last decade of the 19th century witnessed the bicycle's supreme prominence as private transportation. In Canada as elsewhere, mass production and the arrival of the bicycle's modern form, together with pneumatic tires, gear and chain systems, opened the sport to men and women from most social classes. Popular history suggests that the bicycle released women from a fashionable inactivity and freed them from restrictive, conventional dress by bringing forth the then startling bloomer costumes. In fact, the bicycle was merely one agent through which larger societal changes in public roles and in the workplace occurred.

Enthusiasts included poet Archibald Lampman, who sold verses to buy a bicycle for his wife. Kit Coleman, the Toronto Mail's first women's page editor, noted with some disdain that "it is the old girls who are the ardent wheelers."

Semmens, Ghent and Co of Burlington, Ont, had produced nickel-plated bicycles in 1882 and Thomas Fane's company in Toronto produced a machine specially designed for Canadian conditions. By 1898 there were over 25 distinct manufacturers in the country and in Toronto alone over 90 bicycle shops operated.

The formation of a large American conglomerate that year caused 5 of the leading Canadian companies, Massey-Harris, H.A. Lozier, Welland Vale, Goold, and Gendron to join a year later and form Canada Cycle and Motor Co (CCM). With annual production among the 5 members of around 40 000 bicycles and a total employment roster of 1700, the future looked promising. A general glut in the market by the turn of the century, however, and the arrival of the automobile resulted in a steady decline in bicycle sales until WWI.

The bicycle's utilitarian role was by now well recognized. Incredibly, the machine was adopted by many travellers to the gold fields during the Klondike Gold Rush. The km route from Dawson to Whitehorse was the most heavily travelled "bicycle path," and in the late winter of 1901, 250 were on the trail before the spring thaw. When Dawson challenged for hockey's Stanley Cup in 1904, they began their 23-day trek to Ottawa on bicycles.

Bicycle racing, limited in competitive scope in the 1880s, spread to a larger audience in the next decade. Typical of the response was the start of the Dunlop road race in Toronto in 1894, an annual custom lasting until 1926. The world championships were held in Montréal in 1899, and within a few years Canadians were leading performers on the better organized American scene.

Archie McEachern from Ontario and Newfoundland's Urban McDonald were killed in separate board track racing accidents. Burns Pierce and brothers Tom and Nat Butler, all from Nova Scotia, survived successful racing careers in the US. Nat defeated many of the best European racers during a tour of France and Germany in the winter of 1905-06.

Canadians maintained their competitive position through the next several decades. In 1917 Toronto's Art Spencer won the American cycling title in Newark. A decade later a gangling redhead from Victoria, William "Torchy" Peden, emerged as an unlikely talent. He was to become the star of the incredibly popular indoor 6-day bicycle races which peaked in the Depression years. A genuinely likable person, his size created a menacing presence on the track, and woe to the rider who dealt him an unfair blow. Peden's record total of 38 wins lasted until 1965.

It was also in the 1930s that Pierre Gachon of Montréal became the first Canadian to compete in the Tour de France. Symbolic of the sport's appeal was a planned 4300-mile (7166.7 km) race in 1933, starting and ending in Montréal and looping through the American Midwest. Terrible road conditions and underfinancing eventually shortened the event, which Peden won, but its very ambition showed the willingness of N Americans to challenge European leadership in the sport.

Bicycle organization focusing on recreation suffered a serious blow in the first decades of the 20th century, when many of its organizers switched to the automobile. Dr Perry Doolittle, an active 19th-century proponent of good roads for bicyclists, became a leader of Ontario's automobile users' movement. The bicycle's proletarian image confined it in many parts of Canada to an activity reserved for children and those with few apparent means. Still, there were some outstanding personalities. Awakened back in 1883 by an American cyclist, Lyman Hotchkiss Bagg, to the machine's touring possibilities, Canadians on wheel were among the country's first organized tourists.

By the 1890s, 70 hotels from the Maritimes to Manitoba advertised special rates for bicyclists. In 1899 Karl Creelman of Truro, NS, left his home town on a 2-year world journey, becoming the first Canadian to accomplish the feat. In WWI young men with the cycling urge were encouraged to join the Canadian Corps Cyclists' Battalion. Over 1000 men eventually did so, their duties ranging from message delivery and map reading to reconnaissance and actual combat. A battalion publication, The Cyclone, served these cycling veterans for over 50 years. After the war organizational enthusiasm was largely regional, with Québec remaining a leading centre up to and beyond WWII.

Tours by the Metropole Cycling Club of Montréal to Dorval and St-Eustache sur le Lac in 1943 under the leadership of Romeo Martin, a veteran of 75 000 touring miles (125 000 km), attracted over 300 cyclists. Notable individual achievements of the period included Harold Peterson's 10 000 mile (16 097 km) return tour from Saskatchewan to Texas, sponsored by the Quaker Oats company in the 1930s, and Harrison Randall of Fredericton, dubbed Canada's cycling serenader, who travelled 17 500 miles (28 170 km) through N America during WWII, entertaining over 900 communities that supplied the necessary piano.

In the immediate postwar period, bicycling's adolescent character was reinforced by the promotional priority of large manufacturers appealing to the baby-boom phenomenon. Only in the late 1960s did a more mature appraisal of the bicycle's role develop, fed by a growing concern for the environment and fitness. By the 1970s it was estimated that over a quarter of all Canadian households contained at least one bicycle, though in the absence of effective nationwide licensing regulations the figures were guesses at best.

Also fueling the increased interest in the bicycle were the racing accomplishments of Jocelyn Lovell, who almost single-handedly inspired other competitors, and in the 1970s earned the sport increased financial support from public agencies. After the war the sport had been kept alive by isolated pockets of support from Belgian immigrants in Winnipeg and Delhi, Ont, Italian and British communities throughout Canada and local organizers in BC and Québec.

By the mid-1970s new races like the Gastown Classic in Vancouver and then Olympic championships in Montréal in 1974 and 1976, respectively, were attracting international interest. Lovell was joined by a host of equally ambitious men and women, including Karen Strong, Sylvia Burka, Gord Singleton and Steve Bauer. In 1978 Strong and Burka placed 3rd and 4th in the women's 3000 m individual pursuit at the world championships. In 1982 Singleton won Canada's first ever world championship in the professional keirin event.

In 1984 Steve Bauer's silver medal in the Olympic road race was followed by Curt Harnett's silver in the kilometre time trial. Bauer finished the year with a third in the road race at the professional world championship and continued to startle seasoned European observers with a 10th-place finish in his first Tour de France the next year. In 1986 another Canadian, Alex Stieda, became the first N American ever to wear the leader's yellow jersey in the tour, though the honour lasted less than a day.

In the past 100 years, over 400 Canadian companies have produced items ranging from bicycle parts to complete products. The collapse of CCM in the 1980s indicates that the mass production of bicycles, while the backbone of the industry, remains fraught with economic peril, subject as it is to changing tastes and foreign competition.

Despite its increased use for recreation, Canadians retain a strange ambivalence to the bicycle's place on the road. However, interest among Canada's trend-setting professional and business elite in custom-designed machines such as the Mariposa, produced by Bicyclesport of Toronto, may augur well for a cultural re-evaluation of the bicycle's social role as significant as that which greeted it 100 years ago.