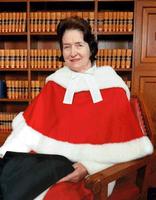 Educated at the University of Aberdeen she immigrated to Canada with her husband, Presbyterian minister John Wilson. She was admitted to Dalhousie Law School in 1954 and was called to the Nova Scotia Bar in 1957 and of Ontario in 1959. She practised law 1958-75 with the large Toronto firm Osler, Hoskin and Harcourt where she specialized in legal research and opinion writing on a wide range of subjects for the other lawyers.

She was appointed to the Ontario Court of Appeal in December 1975 and captured public attention by her imaginative and humane decisions in cases involving human rights, ethnic and sex discrimination, matrimonial property, child custody and the access of citizens to information about themselves collected by government and police.

In 1982, after intense feminist pressure to name a woman to the Supreme Court, Wilson was appointed. Since then she participated in several Supreme Court decisions, one of the most momentous of which is probably striking down Canadian abortion law in early 1988 . In the same year she was appointed a commissioner on the Royal Commission on Aboriginal Peoples. She served on the Supreme Court from 1982 to 1991. In 1991 she was elected a fellow of the Royal Society of Canada, and in 1992 she was named Companion of the Order of Canada.