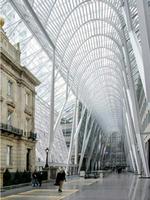 Bell Canada Enterprises Inc (BCE) is a communications company best known for its Bell Canada brand under which it provides local and long-distance service. It is a transnational holding company whose subsidiaries operate primarily in the fields of Canadian telecommunications, directories, telecommunications manufacturing, and research and development. In 2003 BCE ranked eighth among Canadian publicly traded corporations, with $1.8 billion in profit. For that same period, the company reported revenues of $19.2 billion generated by some 64 000 employees.

History
Incorporated by an act of Parliament on 29 April 1880, the Bell Telephone Company of Canada (today Bell Canada) received by its charter the right to construct telephone lines alongside all public rights-of-way in Canada, a most valuable privilege. Under a licensing agreement with the US-based America Bell Telephone company, Bell also manufactured telephones and telephone equipment, an activity that would be spun off as Northern Electric Manufacturing Company in 1895 which, in turn, would become Northern Electric Ltd. (known today as Nortel Networks) following a merger with Imperial Wire and Cable in 1914.

On 14 February 1916, on the occasion of a banquet held by the Bell Telephone Company of Canada in Montréal, a call was placed to Vancouver - the first trans-Canadian telephone call, albeit routed through large parts of the United States. It would be another 16 years before such a call using all-Canadian lines would be made.

In the 1920s the Prairie provinces (Alberta, Saskatchewan, and Manitoba) created their own telephone companies, shrinking Bell's influence somewhat and precipitating the creation of alliances to ensure the provision of coast-to-coast telephone service through a series of toll and collaboration agreements.

The first such alliance was the Telephone Association of Canada, which was formed in the early 1920s and which was followed by the Trans-Canada Telephone System (TCTS) in 1931. The purpose of the TCTS was to ensure the creation and maintenance of a seamless, coast-to-coast telephone system. TCTS was eventually followed by the Stentor Alliance in 1992. Stentor was broken up by the end of 1999 upon Bell's promise to provide "national operational services" to the other telephone companies.

All-digit dialling replaced the combination of letters and numbers on the Bell network on 1 May 1960 in the Québec cities of Ormstown and Franklin Centre. On 15 March 1962, Bell became the first company in the world to offer commercial facsimile services.

What is known today as BCE was created in 1983 through a corporate reorganization whereby BCE became parent to over 80 companies previously known as the Bell Group, of which Bell Canada, the country's largest telephone company, had been head. This reorganization was designed to cast off charter restrictions inhibiting certain corporate acquisitions and investments and remove from detailed regulatory scrutiny many activities and inter-corporate dealings.

BCE and other providers of telecommunications services have moved beyond the traditional range of voice-to-voice services and will continue to do so, subject to consumer acceptance and the CRTC (Canadian Radio-television and Telecommunications Commission). Already providers of high-speed Internet and satellite TV services are aligning themselves with so-called "content providers" (such as The Globe and Mail, in the case of BCE), preparing to enter the Voice over Internet Protocol (VoIP) market, and seeking permission to carry TV signals via their phone lines. A major step in the company's vertical integration of services came with the $1.3 billion acquisition of CTV Inc, the country's largest broadcaster, in 2011. The deal achieved CRTC approval with BCE's pledge of $245 million to be spent over the next seven years to create new programs, enlarge local news budgets and for other initiatives to reinforce domestic production and to move the network toward digital transmission."

Bell Canada is by far the company's largest operating division and has come a long way from being a mere provider of telephone services. It is involved in the enabling and delivery of a wide range of communications through wired telephone traffic, cellular telephones, Internet access, and satellite television. The company remains a major player in wired telephone traffic and is the incumbent telephone company in Ontario, Québec, Atlantic Canada, and Canada's North.

Bell Globemedia represents BCE's foray into the area of media convergence, bringing together the television operations of CTV, which include the main network, The Sports Network (TSN), and a host of other specialty channels; and the media assets of Thomson Corporation, chief among them The Globe and Mail. BCE's stake in Bell Globemedia is 70.1 percent.

The BCE Ventures segment is used to combine a number of BCE's operations for management purposes, notably Telesat, a wholly owned provider of satellite communications and systems management services and CGI, a 29.8 percent owned IT services company, which itself is publicly traded.

BCE Emergis is an e-business service provider, focusing on the processing of claims, payments, loans and security services related to the health and financial services sector. In mid-2004, BCE sold off its interest in BCE Emergis through a public offering in an effort to streamline its operations.

Under its self-imposed mandate of Corporate Social Responsibility (CSR), BCE invests in a wide range of areas and causes. In 2003 the company's investment totalled $67 million and was spread over four areas: Workplace, University Innovation, Society, and Environment.

Sixteen million (or some 24 percent) of this amount was invested under the Society heading and went to youth organizations such as the Boys and Girls Clubs of Canada and Allô Prof; the United Way; and other community development. The company's support of the Bell University Labs and other research and development activities came to $5.4 million and is intended to support goals such as increased innovation activities in western and Atlantic Canada.

BCE's CSR efforts are company-wide and funds come from corporate sources as well as employee contributions, either through donations or volunteering.