Axel Heiberg Island, Nunavut, is Canada’s second northernmost island, located in the High Arctic approximately 1,200 km from the North Pole. The island, 370 km long, is roughly the same size as Switzerland, covering an area of 43,178 km2. 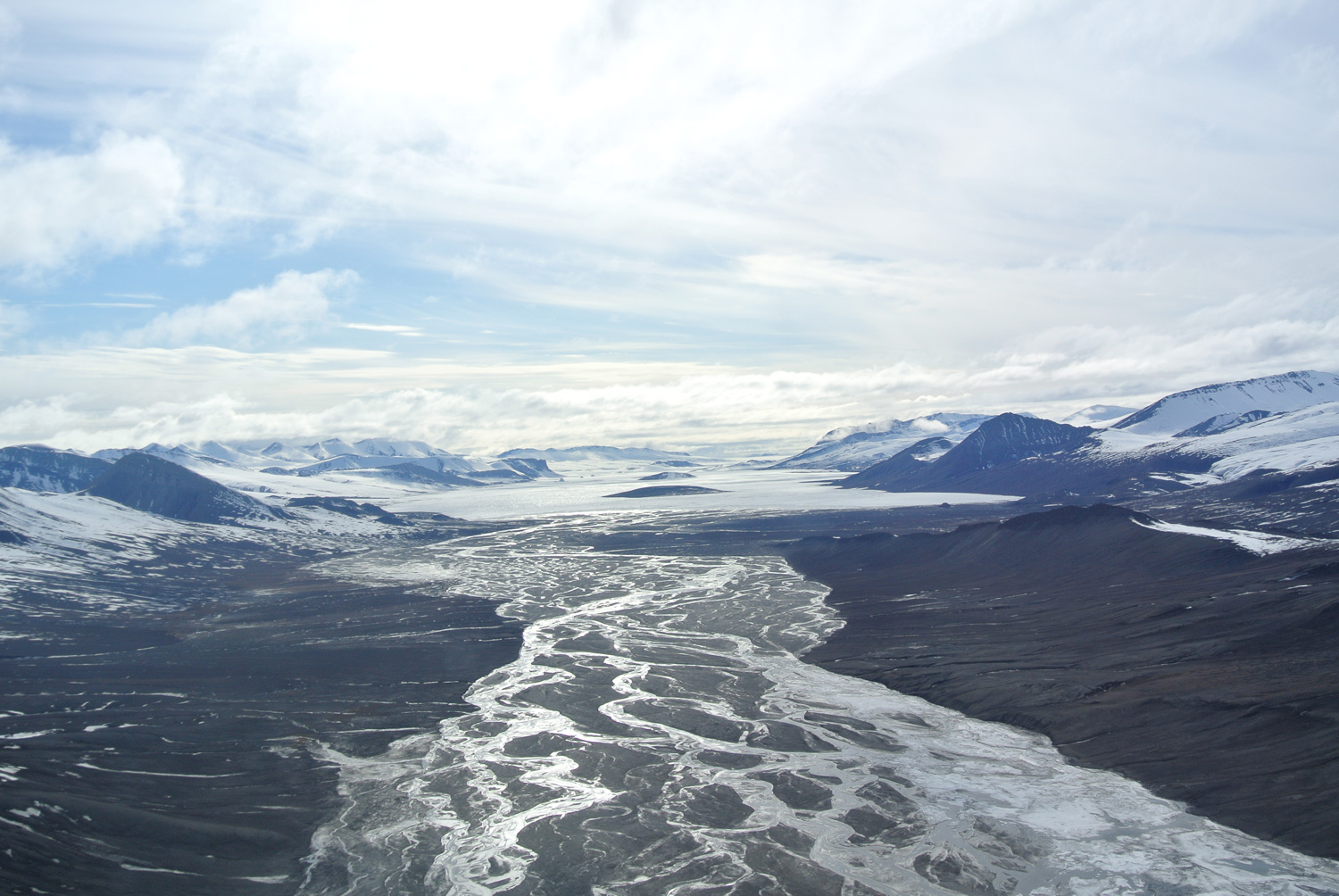 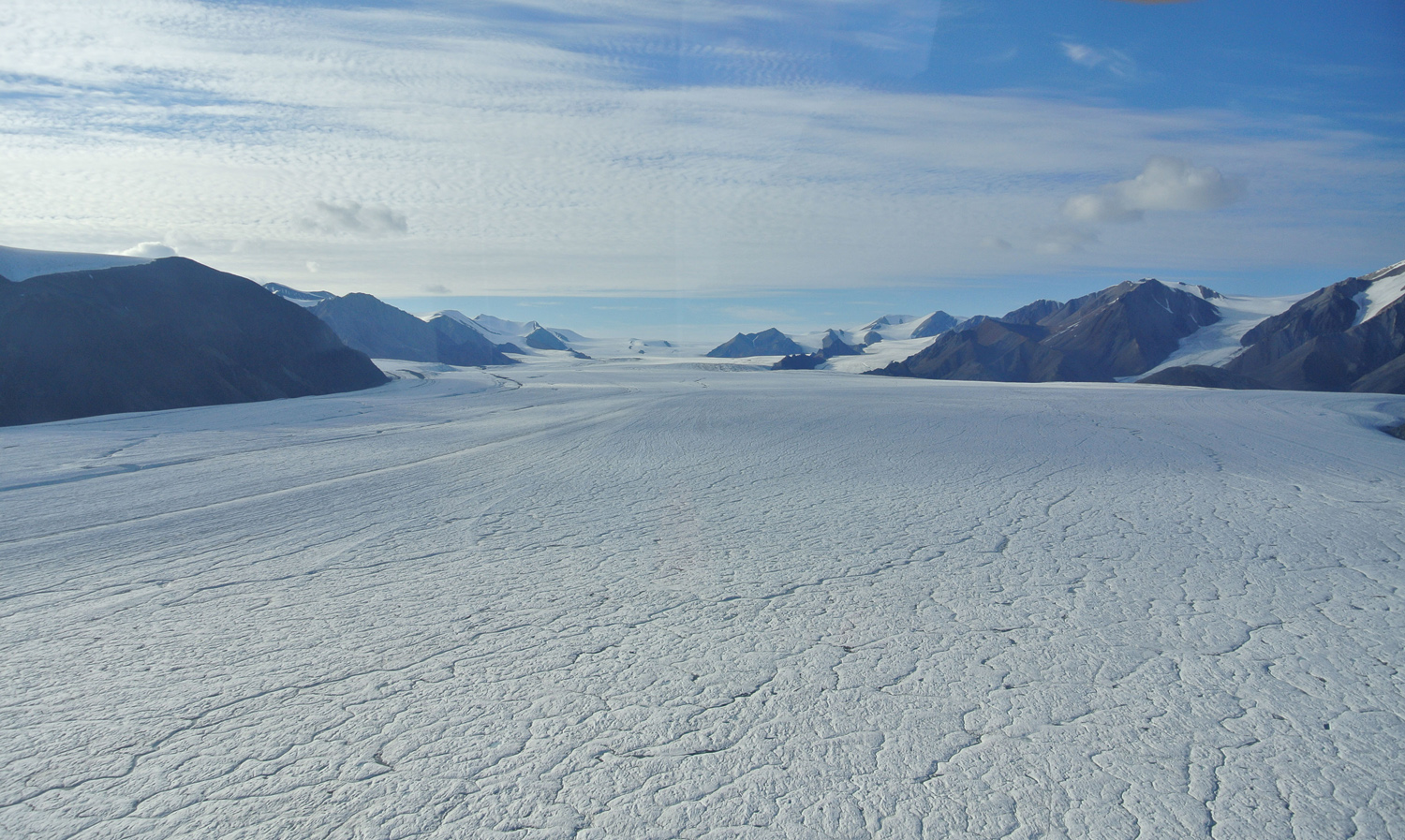 The Thompson Glacier is one of several glaciers on Axel Heiberg Island, Nunavut.
PreviousNext

Beneath Axel Heiberg Island is thick, continuous permafrost (ground material that remains frozen for at least two consecutive years). In the 1970s, during oil and gas exploration in the Arctic, the depth of the permafrost was measured between 400 m and 600 m. The island has a polar desert climate, with dry, cold winters and cool summers. Mean temperatures (provided by the closest long-term weather station, the Eureka Weather Station located on neighbouring Ellesmere Island) are -36.1°C in January, 5.4°C in July, and -19.7°C annually. Roughly 35 per cent of the island is covered permanently by ice, including two main ice caps (the Müller and Stacie ice caps) as well as other glacier types (e.g., valley glaciers). The rest of the island is mostly covered by bare ground, as there is little vegetation. The Princess Margaret Range dominates the island’s topography, and its highest mountain, Outlook Peak, is 2,210 m. The perimeter of the island is made up of three bays (Whitsunday, Sand and Good Friday bays) and multiple fjords (Expedition, Strand, Li, Middle, Skaare, Wolf and Glacier fjords). 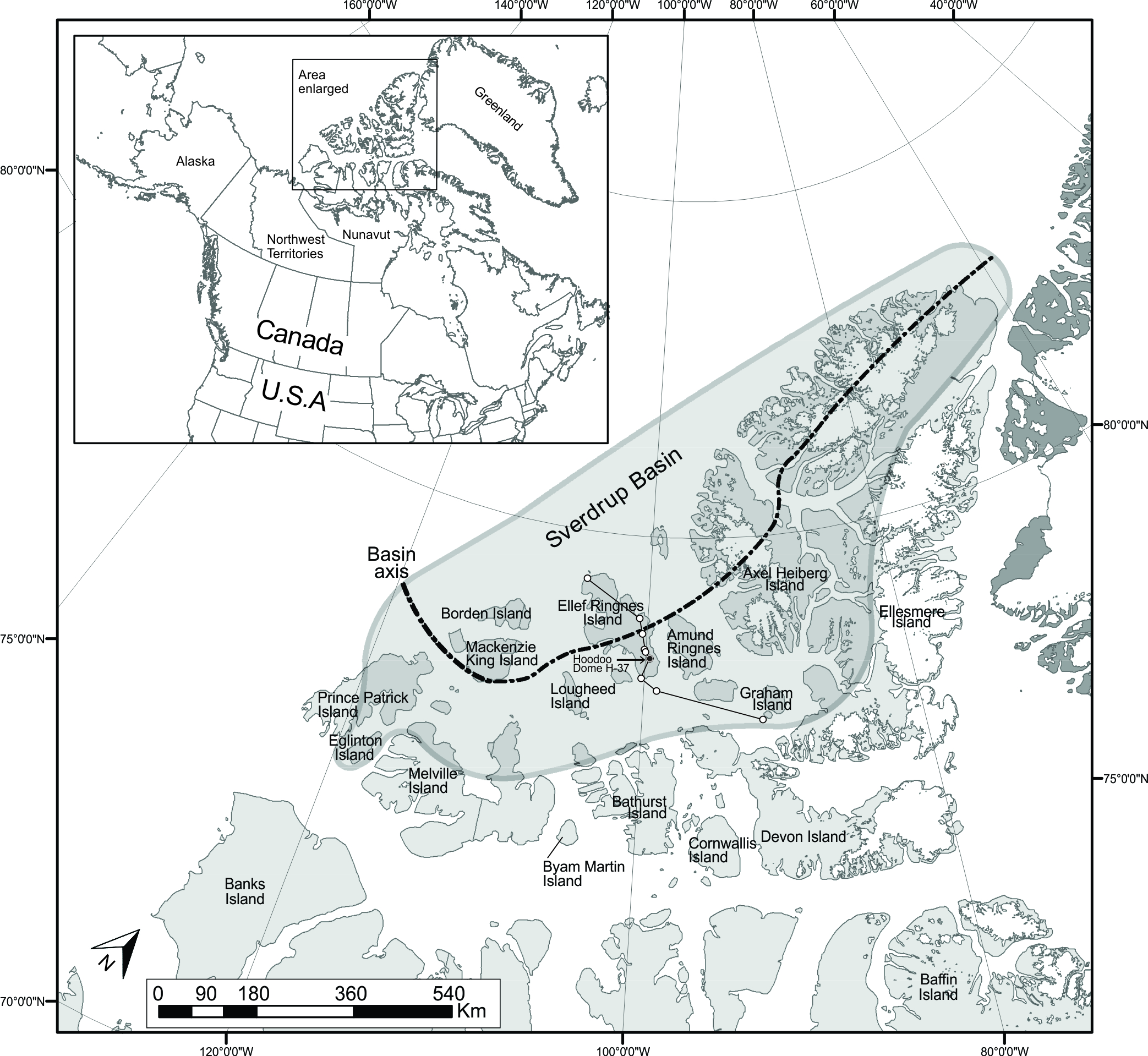 Map of the Canadian Arctic Archipelago showing the outline of Sverdrup Basin. 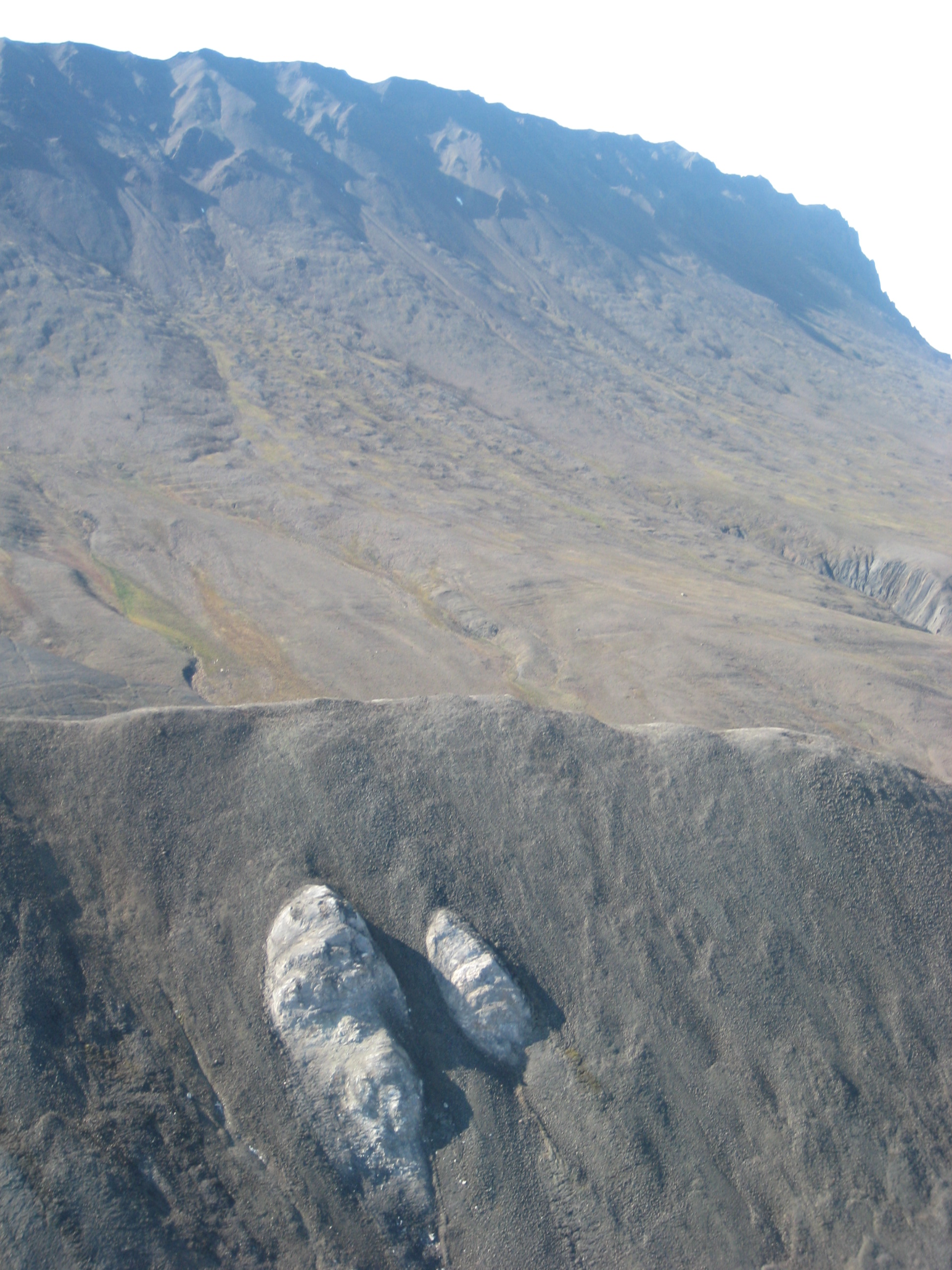 The island is located within the Sverdrup Basin, a 1,000 km by 350 km sedimentary basin encompassing the Western Queen Elizabeth Islands from Prince Patrick Island to Northern Ellesmere Island. Approximately 318 to 66 million years ago, up to 13 km of sediments accumulated in the basin — Axel Heiberg contains the thickest section.

Salts also accumulated in the region early in the Sverdrup Basin’s history when seawater evaporated. When tectonic activity formed the Princess Margaret Mountain Range, this accumulated salt migrated to form salt domes or diapirs. Axel Heiberg Island has the second greatest concentration of diapirs in the world after Iran: out of the 100 that have been identified within the Sverdrup Basin, 46 are found on Axel Heiberg Island. The presence of salt accumulations and diapirs is usually an indication of oil and gas reserves, as the salt accumulates in similar environments that produces oil. Also, salt can act like a seal to form an enclosure around oil reserves, preventing it from migrating. 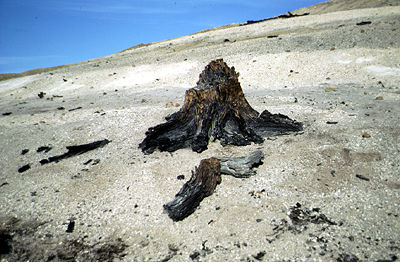 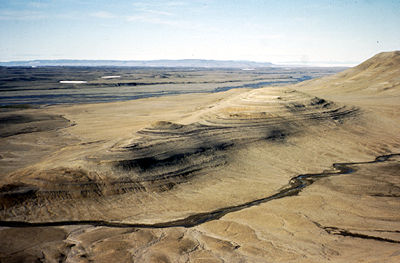 Vegetation on the island consists of patchy polar desert largely composed of herb and shrub species. However, this was not always the case. On the eastern side of the island rows of large, mummified tree stumps were discovered in the summer of 1985 and became known as the Fossil Forest. The stumps have since been dated at more than 45 million years old, evidence that the Far North was at that time much warmer and wetter. This Fossil Forest is not petrified: it contains all of its organic matter, making it a unique glimpse into an ancient ecosystem. The stumps, logs, seeds, cones and leaves are in some cases so well preserved that it is difficult to distinguish them from present-day samples. The most common tree species is dawn redwood, but larch, plane-tree sycamore, Chinese water chestnut, spruce and pine have also been found.

Animal evidence of a past semitropical climate on Axel Heiberg Island was also revealed in the late 1990s. Alligator and turtle fossils were found at Mokka Fiord and fossilized tooth fragments of an extinct, huge rhinoceros-like herbivore, Brontotheriidae, were found in the Fossil Forest site. 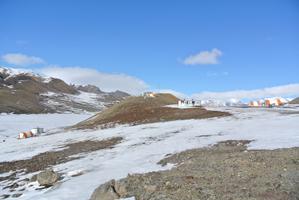 The island was first seen by Europeans in 1899 during the 1897–1902 Norwegian expedition to explore and name unchartered areas of the Arctic led by Otto Sverdrup. The island was named after a Norwegian, Axel Heiberg, who was a sponsor of the expedition. The island is uninhabited (the closest community is Grise Fiord, located on southern Ellesmere Island) and houses two research centres: The McGill Arctic Research Station (MARS) and a Canadian Space Agency (CSA) station. Among its projects MARS, established in 1960 by McGill University, studies the White Glacier — an official reference glacier for the United Nations Framework Convention on Climate Change. Studies show the White and Baby glaciers on Axel Heiberg Island have been losing ice almost every year since the late 1970s, a sign that climate change is already impacting high latitude regions. The CSA camp was established in 2007, 10 km west of MARS along Expedition Fiord. Axel Heiberg is of interest to the CSA as its cold and dry climate makes it an ideal place to study processes that may occur on planet Mars. This planetary research is now supported by both camps.