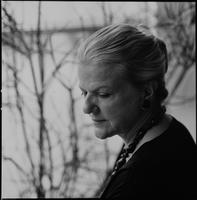 Doris Hilda Anderson, née McCubbin, writer, editor, activist (b at Calgary, Alta 10 Nov 1921; d at Toronto 2 Mar 2007). After graduating from teachers' college in 1940, Doris Anderson worked for a few years and then returned to academics at the University of Alberta to earn her BA (1945). She worked as a journalist and joined CHATELAINE magazine in 1951 in the advertising department. During 1957-77 she was its editor, and in recasting the magazine as a forum for feminist ideas she doubled its circulation and made it the most profitable publication in the Maclean-Hunter domain.

Anderson campaigned for a seat in the House of Commons in a 1978 by-election, however she was not successful. In 1979 she accepted a Liberal government appointment and became the president of the CANADIAN ADVISORY COUNCIL ON THE STATUS OF WOMEN. At that time Parliament was preparing changes to the constitution and the CHARTER OF RIGHTS AND FREEDOMS. Anderson did not believe women's rights were sufficiently supported by the legislation and became involved in a "Women and the Constitution" conference that was planned by the Advisory Council to discuss the impact of the legislation. Anderson resigned from the council in 1981, charging that the government had intervened improperly to prevent the conference. Her resignation became a catalyst that prompted more than 1300 women to join the Ad Hoc Conference on the Status of Women. The conference and subsequent lobby campaign resulted in the legislation being amended to include a clause that identified men and women as equal under the law.

Doris Anderson's resignation drew close attention to her concerns about the inadequacies of constitutional provisions concerning the STATUS OF WOMEN, and provoked a sharp response from women's organizations across the country. Her advocacy for women continued from 1983 to 1984, when she served as president of the NATIONAL ACTION COMMITTEE ON THE STATUS OF WOMEN.

During her career Anderson wrote for the Toronto Star from 1982 to 1992, completed an autobiography titled Rebel Daughter (1996), authored several novels including Two Women (1978), Rough Layout (1981), and a critical survey of women's rights titled Unfinished Revolution: Status of Women in Twelve Countries (1991). She received many awards including 3 honorary degrees, and from 1992 to 1996 Anderson served as chancellor of the University of Prince Edward Island. Anderson served on the Board of Governors at York University, and in 2001 the Doris Anderson Ontario Graduate Scholarship in Women's Studies was established at York to recognize her contributions.