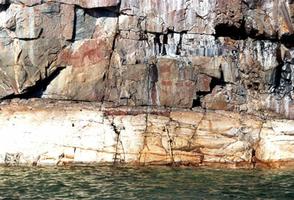 View of the Agawa site from the lake (courtesy Serge Lemaître).

Profile of the Agawa site (courtesy of Serge Lemaître).

Commemoration of a war expedition at the Agawa site (courtesy of Serge Lemaître). 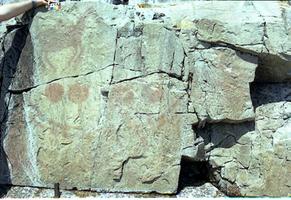 One of the most famous pictograph sites in Canada is found in Agawa Bay, within Lake Superior Provincial Park. The site's name in Ojibwa is Mazinaubikiniguning, which means "the adorned rock on Agawa Lake." The site was discovered by Selwyn Dewdney in 1958, although it had already been reported by the ethnologist Henry Schoolcraft. The latter had also received the interpretation of the paintings at the beginning of the 19th century, although he never actually saw them. It was while carrying out surveys of First Nation populations around Sault Ste Marie that Schoolcraft met Shingwaukonce, who drew for him on birch bark the painted figures as he remembered them.

The cliff is on a big rock of white crystalline granite, which contrasts with the red paintings although mineral traces, lichens and graffiti have damaged them in some places. The rock can be divided into about a dozen panels where are found abstract figures (lines, circles, etc), but also beautiful representations of canoes, and real animals (eg, a bear, an eagle, a horse, a turtle) as well as mythical ones. The Agawa site is one of the most visited indigenous archaeological sites in Canada.

The first paintings represent canoes, which are preceded by animals (a heron, an eagle, and a beaver) that are probably the clan symbols of the canoes' passengers. According to Shingwaukonce, it is the great chief and Shaman Myeengun who drew those paintings to commemorate a war expedition.

The site's central part includes an individual on a horse, two long curved lines, four circles, one canoe beside two-legged snakes, and a large representation of Mishipeshu, the Great Lynx. It is apparently Shingwaukonce himself who traced these paintings when he led a revolt against miners who exploited the copper deposit of Mamainse, on the shores of Lake Superior. After fasting several days at the Agawa rock to gain spiritual powers, he chose to paint Mishipeshu because this aquatic monster is the holder and protector of copper. The horseman was apparently drawn later, either to show Shingwaukonce's power as a shaman, as a few Natives of the region believe, or to commemorate a war expedition, as reported by Schoolcraft. The circles located under the horse represent, according to the former, the fact that he belongs to the fourth degree of the Midewiwin lodge, whereas for the ethnologist, they are four suns that stand for four days.

The last panel of the site shows another representation of Mishipeshu with a turtle, a fish and a canoe. This part of the site is not accessible to visitors. The majority of paintings from the Agawa site probably date from the 17th and 18th centuries. This dating obtained through Shingwaukonce's testimonies is confirmed by the representations, since the horse only appeared in this region after the 17th century.