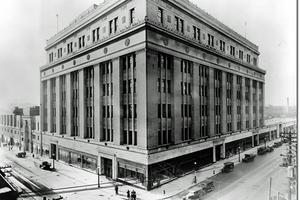 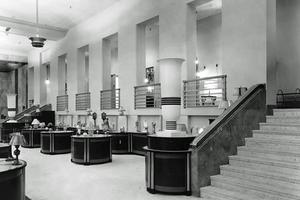 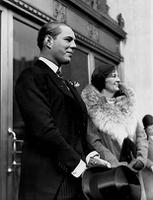 It could have been Toronto's version of the Rockefeller Center: a luxury art deco-inspired department store with fine dining and entertainment space, coupled with a 38-storey office tower. But the Great Depression resulted in only the first phase of Eaton's grand plan completed, a seven-storey store at Yonge and College.

Opened in October 1930, the main floor of the store was full of art deco touches from in-house designer René Cera. It was the seventh floor however, that was the showpiece. French architect Jacques Carlu had designed several of Lady Flora Eaton's favourite ocean liners, and was hired to bring a taste of elegance to the public facilities planned for the top of the store. The results were the Eaton Auditorium, a 1,200-seat concert hall whose acoustics were compared to Carnegie Hall, and the stylish Round Room dining area. The Auditorium was the site of recitals by the leading artists of the day, including Sergei Rachmaninoff, Jussi Bjoerling, Jacqueline Dupré, Duke Ellington, Billie Holiday, Frank Sinatra and Glenn Gould.

By the time Eaton's closed the store and seventh floor in 1976, Carlu's work had already been marred by poorly conceived renovations. Opposition to the owner's proposal to demolish the hall was led by the Friends of the Eaton Auditorium and local preservation groups. Thus began a decade-long debate, which included a 1986 Supreme Court of Canada decision prohibiting demolition. The seventh floor then sat vacant until 2003, when, after an extensive and beautiful restoration back to its early 1930s prime, its rooms reopened as The Carlu event venue.