They draw inspiration from the Book of Acts, their guiding philosophy from the words of Christ. But listen long enough to members of the Christian Peacemaker Teams and you'll soon hear echoes of another apostle of non-violent resistance.

Eric Walters’s young adult novel Shattered (2006) tells the story of Ian Blackburn. He is shaken out of his privileged life when he meets Jack, a homeless veteran of the Canadian Armed Forces. A member of the failed United Nations peacekeeping mission to Rwanda, Jack introduces Ian to some of humanity’s darkest moments. Shattered received the 2007 Ontario Library Association’s White Pine Award for best Canadian children’s book and the 2007 National Chapter of Canada International Order of the Daughters of Empire Violet Downey Book Award.

12e Régiment blindé du Canada (12e RBC) is the junior of three regular armoured regiments in the Canadian Army. The regiment was established in 1871 as a militia infantry battalion and was converted to an armoured regiment in 1936. In 1968, the Regular Force regiment was formed, designated 12e RBC. The regiment or detached squadrons have served in peace operations and in Afghanistan. 12e RBC has been based at CFB Valcartier, Quebec, since 1968 and is part of 5 Canadian Mechanized Brigade Group, 2nd Canadian Division.

Before 1870, the defence of Canada was a costly burden for France and then for Great Britain, invariably against enemies to the south, be they Iroquois, English or the American invaders of 1775-76 (see AMERICAN REVOLUTION) or of 1812-14.

Canadians are not normally accustomed to outward displays of patriotic pride over their fallen warriors. Since 1948, more than 100 Canadians have lost their lives nobly in peacekeeping missions around the world, their passing hardly noted beyond their immediate families and regiments.

The Royal 22e Régiment (R22eR) is one of the three infantry regiments of the Canadian Regular Force (see Canadian Armed Forces). It is a francophone regiment made up of five battalions, of which three belong to the Regular Force and two to the Reserve Force. In 2014, the R22eR celebrated its 100th anniversary. Its headquarters are at the Citadelle de Québec. The regiment has participated in all of Canada’s major military engagements since the First World War, including the United Nations peace missions and the campaign in Afghanistan.

Renamed Canadian Forces Base Petawawa in 1968, the base has a total population of 5000. As one of Canada's busiest operational bases, it is economically important to the adjacent town of PETAWAWA and nearby PEMBROKE.

The boys at the male-oriented United Nations called them the "G-7," short for Girls Seven. During the mid-1990s, Canadian Ambassador Louise Fréchette, U.S.

Military engineers are soldiers specially trained to apply engineering science and technology to war. Their designation as "sappers" refers to their task of sapping - digging trenches.

It does not help Boutros Boutros-Ghali that he has a name some Americans seem to find hysterical. All David Letterman has to do for an easy laugh is work the secretary general of the UNITED NATIONS, yet again, into one of his Top 10 lists.

Resources for Grade 10: Canadian History since World War I (CHC2D)

Resources for Grade 10: Canadian History since World War I (CHC2D)

This page offers resources that pertain to topics covered in the Ontario curriculum. The list below links directly to Historica Canada’s bilingual resources. Search The Canadian Encyclopedia to find additional articles on specific topics. Please feel free download, print, and share our materials with others who may find them useful.

The Regina Manifesto was the founding policy document of the Co-operative Commonwealth Federation (CCF). Written in 1933, the 14-point policy statement called for eradicating capitalism and adopting socialist economic and social policies in a democratic state.

The Sea King entered service with the Royal Canadian Navy (RCN) in 1963 as an all-weather shipborne helicopter to provide close antisubmarine warfare (ASW) protection for ships at sea. By the time it was retired from service 55 years later, in 2018, it had undergone a variety of modifications and role-changes. Throughout, it maintained its well-earned reputation as the workhorse of the fleet. Sea King helicopters were a critical element in nearly every naval operation at home and abroad.

Given the horror that has characterized Sierra Leone's recent past, it was a bold move.

Storytime was starting to make me feel inadequate. Fourteen of us sitting in a shuttle bus, torches in hand, sharing how we came to be carrying the OLYMPIC flame through the streets of Halifax.

Known as the “Queen of Battle,” the infantry is the branch of the army that provides its primary fighters. The main responsibility of infantry soldiers is to “close with and destroy the enemy.” Although they are trained, armed and equipped to fight on foot, infantry soldiers are usually transported to the battlefield by other means. Infantry soldiers can also specialize as light, mechanized, airmobile, airborne and other types. The characteristics of infantry are mobility, firepower, flexibility, communications and vulnerability (to enemy action). Infantry soldiers are trained in a wide range of individual and crew-served weapons and work with the all-arms team of reconnaissance, armour, artillery, air defence, engineers, tactical aviation and other combat specialists. Except for a brief time during the feudal period (when cavalry dominated), the infantry has been the largest single component of armies since ancient times. In Canada, the infantry has always been the army’s largest element.

We celebrate the heroism and mourn the sacrifices of our military through two world wars, and assorted other foreign conflicts and peacekeeping missions. Yet less attention has been paid to the related efforts of women — in particular, the nurses who have built their own proud tradition of service and sacrifice. 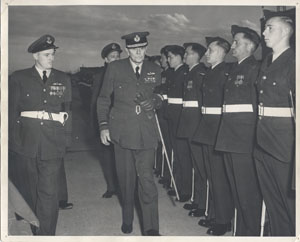 "Our commitment was to do observations along the ADL, which spread from the Mediterranean down to the Gulf of Aqaba - the tip of the Sinai Peninsula -re-supplying Army and UN outposts along the ADL by air."