The Oldman River is a heavily regulated river flowing through the arid, agricultural region of southwestern Alberta. Although population in the region is relatively low — Lethbridge is the largest city — water use is very high, primarily for irrigation to supply numerous farms and ranches with adequate water during the growing season. The Rocky Mountains generate up to 90 per cent of the streamflow; however, the amount of water moving along the river varies from year to year and season to season. Additionally, droughts are common, and numerous dams, weirs, and reservoirs on the Oldman and its tributaries are used to manage the high water demand. The Oldman River is also used for hydroelectricity generation, municipal drinking water and recreational activities including fishing, boating and camping.

Dinosaurs were a group of animals that dominated the land environments of every continent. They lived from the late Triassic period to the end of the Cretaceous period (225 to 65 million years ago). However, birds are the direct descendants of dinosaurs, meaning dinosaurs are still common today. Paleontologists have found more than 100 different species of dinosaurs in Canada. The primary site of these fossils is Dinosaur Provincial Park, Alberta. Well-known dinosaurs first named from Canadian specimens include Albertosaurus, Centrosaurus, Corythosaurus, Dromaeosaurus,Gorgosaurus, Lambeosaurus, Pachyrhinosaurus, Parasaurolophusand Styracosaurus. 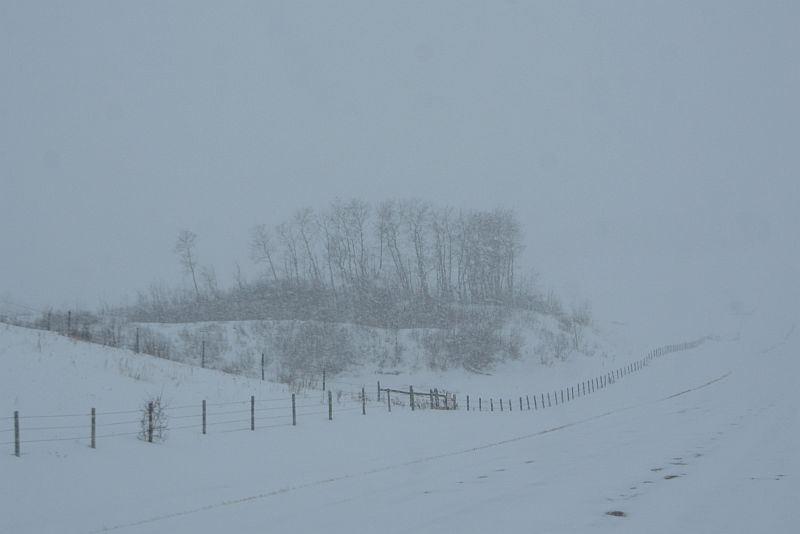 An Alberta Clipper is a type of low-pressure weather system that forms in Alberta or nearby, on the eastern side of the Rocky Mountains. It is a fast-moving storm, hence the name “clipper,” which refers to 19th-century ships known for their speed. Depending on the province where the system approaches the Canada-United States border, sometimes it is called a Saskatchewan Screamer, Manitoba Mauler or Ontario Scary-o. It may also be called a Canadian Clipper or simply a Clipper. Such storms mostly occur in December and January but are common in the fall and spring, too. They form about 5–20 times per season.

Edmontosaurus is a genus of large, plant-eating, duckbilled dinosaur. There are two species of Edmontosaurus. One, E. regalis, lived between 73.1 and 69.6 million years ago in Alberta. The other, E. annectens, lived between 68 and 66 million years ago in Saskatchewan, Montana, North Dakota, South Dakota, and possibly Alberta. Edmontosaurus was one of the largest North American herbivores of its time and even surpassed Tyrannosaurus rex in size. The first specimen to be called Edmontosaurus was discovered in 1912 in the Drumheller area. It became the first mounted dinosaur skeleton on display in Canada.

Heartland is a family drama that airs on CBC TV on Sundays at 7:00 p.m. Based on novels published by Working Partners under the name Lauren Brooke, it premiered in 2007 and is the longest-running one-hour drama in Canadian history. Set on a family ranch called Heartland, the Alberta-shot series follows Amy Fleming’s (Amber Marshall) relationships with her family, with ranch hand Ty Borden (Graham Wardle) and her special abilities as a horse whisperer. Winner of five Directors Guild of Canada Awards for best family television series, Heartland has averaged more than 1 million viewers per episode and is broadcast in more than 100 countries.

Encana Corporation produces, transports and markets oil and natural gas. It was formed in 2002 through the merger of the Alberta Energy Company Ltd. and the PanCanadian Energy Corporation. In 2009, the company split in two. Encana remained a corporate entity focused on the exploration, production and marketing of natural gas, and Cenovus Energy was formed to concentrate on oil exploration, production and sales. In 2019, Encana announced plans to move its corporate headquarters from Calgary, Alberta to Denver, Colorado and rebrand as Ovintiv Inc. Encana Corporation earned $5.9 billion in revenue and $1.07 billion in profit in 2018, and it held $15.3 billion in assets. It is a public company that trades on the Toronto Stock Exchange and New York Stock Exchange under the symbol ECA.

Billed as the "Greatest Outdoor Show on Earth," the first exhibition took place in 1886 and the world-famous Stampede rodeo began in 1912, instigated by Guy Weadick, an American trick roper who had visited Calgary and judged the emerging town to be a prime location for a big rodeo.

Alberta’s “Famous Five” were petitioners in the groundbreaking Persons Case. The case was brought before the Supreme Court of Canada in 1927. It was decided in 1929 by the Judicial Committee of the Privy Council, Canada’s highest appeals court at the time. The group was led by judge Emily Murphy. It also included  Henrietta Edwards, Nellie McClung, Louise McKinney and Irene Parlby. Together, the five women had many years of active work in various campaigns for women’s rights dating back to the 1880s and 1890s. They enjoyed a national — and in the case of McClung, an international — reputation among reformers.

NOVA Corporation was a Canadian energy company based in Calgary. Originally known as the Alberta Gas Trunk Line Company Ltd., it was established in 1954 to build, own and operate Alberta’s natural gas gathering and transmission facilities. In 1998, NOVA merged with TransCanada (now TC Energy), creating the fourth largest gas pipeline company in North America.

The $7.9 billion Northern Gateway project was a pipeline proposal that Enbridge put forward in 2008. Northern Gateway would have carried diluted bitumen (“dilbit”) about 1,170 km from Bruderheim, Alberta to a terminal on the Pacific Ocean at Kitimat, British Columbia. Enbridge claimed that the project would create $1.2 billion in tax revenue for BC, as well as 560 jobs. The Federal Court of Appeal overturned the pipeline’s approval in 2016. That same year, the Liberal government of Prime Minister Justin Trudeau rejected the project.

The National Energy Program (NEP) was an energy policy of the government of Canada from 1980 through 1985. Its goal was to ensure that Canada could supply its own oil and gas needs by 1990. The NEP was initially popular with consumers and as a symbol of Canadian economic nationalism. However, private industry and some provincial governments opposed it.

A federal-provincial deal resolved controversial parts of the NEP in 1981. Starting the next year, however, the program was dismantled in phases. Global economic conditions had changed such that the NEP was no longer considered necessary or useful. The development of the oil sands and offshore drilling, as well as the rise in Western alienation and the development of the modern Conservative Party of Canada, are all aspects of the NEP’s complicated legacy.

The Line 3 Replacement Program (also known as L3RP) is an upgrade to the Enbridge Mainline pipeline. The existing crude oil pipeline runs from Hardisty, Alberta to Superior, Wisconsin. The 1,660 km long upgrade is the largest project in the history of Calgary-based Enbridge. The Alberta to Manitoba section of the L3RP has been in service since December 2019.

TC Energy Corporation (formerly TransCanada Corporation) is a natural gas, oil and power-generation company headquartered in Calgary, Alberta. TC Energy owns more than 92,600 km of natural gas pipeline in North America and transports more than 25 per cent of the gas consumed on the continent. It also operates power plants and gas storage facilities. A public company, it trades on the Toronto Stock Exchange and the New York Stock Exchange under the symbol TRP. In 2018, TC Energy registered $13.7 billion in revenue and $3.5 billion in profit and held $98.9 billion in assets. The company employs about 7,300 people, more than half of them in Canada.

Keystone XL was a proposed 1,947 km long pipeline project that would have carried crude oil from Alberta to Nebraska. It was owned by Calgary-based TC Energy Corporation. The pipeline was named XL for “export limited.” First proposed in July 2008, it was the prospective fourth phase of TC Energy’s existing Keystone Pipeline system. In Canada, Keystone XL had the support of both the federal and Alberta governments. However, the project faced significant opposition and legal challenges on environmental grounds. In January 2021, United States president Joe Biden cancelled its permit on his first day in office. On 9 June 2021, TC Energy and the Alberta government announced the termination of the Keystone XL pipeline.

The Trans Mountain Expansion is a project to build about 980 km of new pipe, most of which will run parallel to the existing Trans Mountain oil pipeline. The new line will carry diluted bitumen, or “dilbit,” from Edmonton, Alberta to Burnaby, British Columbia. The expansion will increase the pipeline route’s overall capacity from 300,000 barrels per day to 890,000 barrels per day.

The project’s first owner, Kinder Morgan Canada, sold it to the Government of Canada in 2018. The Trans Mountain Expansion has been a focus of environmental and economic debates, as well as political conflicts. The $12.6 billion project is now under construction.

Pipelines are systems of connected pipes used to transport liquids and gases — namely oil and natural gas — across long distances from source to market. More than 840,000 km of pipelines criss-cross the country, part of a larger oil and gas sector that employs between 100,000 and 200,000 Canadians. According to Natural Resources Canada, the sector earns the government an average of $19 billion in royalties, fees and taxes each year (see Natural Resources in Canada). It also contributes nearly 8 per cent of Canada’s gross domestic product.

Yet pipelines have also been controversial in Canada over fears that the fossil fuel use they facilitate could be significantly contributing to climate change. In recent years, Indigenous groups, environmentalists, municipalities, mayors and labour unions have opposed numerous pipeline projects they believe could contaminate local waterways through spills and leaks. (See also Environmental Movement in Canada

The Co-operative Commonwealth Federation (CCF) was founded in Calgary in 1932. It was a political coalition of progressive, socialist and labour groups. It sought economic reform to help Canadians affected by the Great Depression. The party governed Saskatchewan under Premier Tommy Douglas, who went on to be the first leader of the federal New Democratic Party (NDP). The CCF merged with the Canadian Labour Congress (CLC) to form the NDP in 1961. Although the CCF never held power nationally, the adoption of many of its ideas by ruling parties contributed greatly to the development of the Canadian welfare state.

The Canadian Prairies were peopled in six great waves of migration, spanning from prehistory to the present. The migration from Asia, about 13,300 years ago, produced an Indigenous population of 20,000 to 50,000 by about 1640. Between 1640 and 1840, several thousand European and Canadian fur traders arrived, followed by several hundred British immigrants. They created dozens of small outposts and a settlement in the Red River Colony, where the Métis became the largest part of the population. The third wave, from the 1840s to the 1890s, consisted mainly but not solely of Canadians of British heritage. The fourth and by far the largest wave was drawn from many nations, mostly European. It occurred from 1897 to 1929, with a pause (1914–22) during and after the First World War. The fifth wave, drawn from other Canadian provinces and from Europe and elsewhere, commenced in the late 1940s. It lasted through the 1960s. The sixth wave, beginning in the 1970s, drew especially upon peoples of the southern hemisphere. It has continued, with fluctuations, to the present. Throughout the last century, the region has also steadily lost residents, as a result of migration to other parts of Canada, to the United States, and elsewhere.