Dene games are tests of physical and mental skill that were originally used by the Dene (northern Athabascan peoples) to prepare for the hunting and fishing seasons, and to provide entertainment. Today, Dene games (e.g., Finger Pull and Hand Games) are still played in many schools and community centres in the North as a means of preserving tradition and culture. As competitive sports, Dene games are also featured in various national and international athletic competitions, including the Arctic Winter Games.

Olympic Games are an international sports competition, held every four years. Until 1992 the Olympic Summer Games and the Olympic Winter Games were held in the same year, but beginning in 1994 they were rescheduled so that they are held in alternate even-numbered years.

In 1976, Montréal became the first Canadian city to host the Olympic Games. The XXIst Olympiad, held from 17 July to 1 August 1976, included memorable performances from many athletes, including Romanian gymnast Nadia Comaneci and American decathlete Caitlyn Jenner. Although Canada did not win a gold medal at the Games, the Canadian team won 11 medals in total —more than double the number of medals won at each of the previous two Olympic Games. The Olympic facilities, while costly, became Montréal landmarks and many are still used for training and competition. 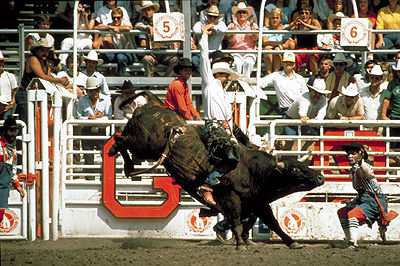 The Calgary Exhibition and Stampede is a combined agricultural fair and rodeo. Other presentations such as manufacturing and home and garden exhibitions occur at the same time, as well as displays relating to Indigenous cultures, an evening stage show and a large midway with sideshows and rides. Every July the Stampede opens with a parade; the rodeo and other events continue for 10 days.

For many Canadians, particularly baby boomers and Generation X, the eight-game hockey series between Team Canada and the national team of the Soviet Union in September 1972 provided the greatest moment in Canada’s sporting history. Most expected that Canada would handily defeat the Soviet Union, but this confidence quickly disappeared when Canada lost the first game. The series was tied heading into the final game in Moscow, which ended in dramatic fashion, with Paul Henderson scoring in the final seconds to give Canada the victory. The series became as much a Cold War political battle of democracy versus communism and freedom versus oppression as it was about hockey. The series had a lasting impact on hockey in Canada and abroad.

Team Canada’s roster of 35 players for the 1972 series against the Soviet Union was announced by coach and general manager Harry Sinden on 12 July 1972, during a press conference in Toronto. This initial roster included many of the best-known players in the NHL, although a few (like Dave Keon) were conspicuously absent. Changes soon had to be made, however, as players like Bobby Hull signed with the rival World Hockey Association (WHA) and were therefore excluded from the team. Another Canadian star, Bobby Orr, was sidelined with a chronic knee problem.

The Grey Cup is a trophy produced by Birks Jewellers that has been part of Canadian sports since 1909, when it was donated by Governor General Earl Grey for the Canadian football championship. The original conditions stated that the "cup must remain always under purely amateur conditions,"although there is good reason to believe that this was at the urging of P. D. Ross of the Ottawa Journal rather than Lord Grey. The name "Grey Cup" has since been used to refer both to the trophy and the event.

The Grey Cup was donated by Albert Henry George Grey, yet another of those governors general who have left their monikers on our sporting life.
Toronto Maple Leafs 1967: The Last Stanley Cup

​With our national game now a multi-billion-dollar professional sport, it is perhaps comforting to look back to simpler times when hockey was closer to community, and was played for love and glory by amateurs. In the early days of Stanley Cup competition, any Canadian team with some success at the senior level could challenge the current champs. In 1905 one of the strangest challenges came from Dawson City, Yukon.
Barilko has won the Stanley Cup for the Maple Leafs!