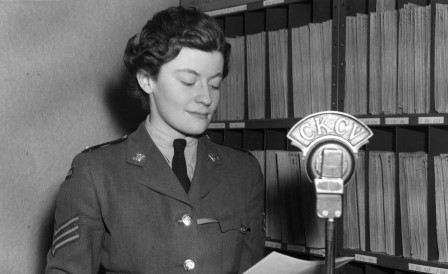 Demasduwit (also known as Shendoreth, Waunathoake, Mary March), one of the last of the Beothuk (born 1796; died 8 January 1820 at Bay of Exploits, Newfoundland). Demasduwit helped to preserve the Beothuk language and culture. In 2007, the Canadian government recognized her as a person of national historic significance.

Lillian Freiman (née Bilsky), OBE, benefactor, community activist, organizer, civic leader and Zionist (born 6 June 1885 in Mattawa, ON; died 2 November 1940 in Montreal, QC). Lillian Freiman used her high social status and wealth to help those less fortunate, both within and beyond the Jewish community. For her work assisting First World War soldiers and leading the Poppy Campaign, the Canadian Legion made her an honorary life member in 1933. Freiman was the first woman to receive this honour.

Roberta Lynn Bondar, CC, OOnt, FRSC, astronaut, neurologist, physician, educator, photographer (born 4 December 1945 in Sault Ste Marie, ON). Bondar became the first Canadian woman and second Canadian in space when she flew aboard the American space shuttle Discovery in 1992. A doctor specializing in the nervous system, she is a pioneer in space medicine research. Bondar is also an exhibited and published nature photographer. She established The Roberta Bondar Foundation to educate people about environmental protection through art, and she currently serves as one of the organization’s directors.

Shawnadithit (also known as Nance or Nancy April), the last Beothuk (born circa 1800-6 in what is now NL; died 6 June 1829 in St. John’s, NL). Shawnadithit’s record of Beothuk culture continues to shape modern understandings of her people. In 2007, the federal government announced the unveiling of a Historic Sites and Monuments Board of Canada (See Historic Site) plaque recognizing Shawnadithit’s importance to Canadian history.

Jean Cuthand Goodwill, OC, nurse, public servant and Indigenous health and education advocate (born 14 August 1928 on the Poundmaker Cree Nation, SK; died 25 August 1997 in Regina, SK). Cuthand Goodwill was one of the first Indigenous registered nurses in Canada. In 1974, she cofounded Indian and Inuit Nurses of Canada (now known as the Canadian Indigenous Nurses Association). She was a lifelong organizer, writer and educator who promoted First Nations health and culture.

Lucy Maud Montgomery, OBE, writer (born 30 November 1874 in Clifton (now New London), PEI; died 24 April 1942 in Toronto, ON). Lucy Maud Montgomery is arguably Canada’s most widely read author. Her first novel, Anne of Green Gables (1908), became an instant best-seller. It has remained in print for more than a century, making the character of Anne Shirley a mythic icon of Canadian culture. Montgomery produced more than 500 short stories, 21 novels, two poetry collections, and numerous journal and essay anthologies. Her body of work has sold an estimated 50 million copies worldwide. Anne of Green Gables alone has been translated into at least 36 languages as well as braille. It has been adapted dozens of times in various mediums. Montgomery was named an Officer of both the Order of the British Empire and the Literary and Artistic Institute of France. She was the first Canadian woman to be made a member of the British Royal Society of Arts and she was declared a Person of National Historic Significance in Canada.