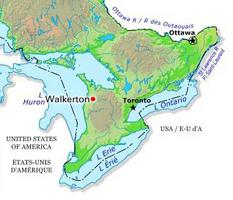 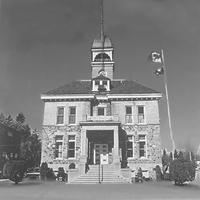 Walkerton, Ont, urban area, population 4967 (2011c), 4905 (2006c). Walkerton is located on the banks of the Saugeen River in Bruce County, 185 km north of Toronto. Walkerton is named after its founder, Joseph Walker, who came to the area in 1851. Incorporated as a town in 1871, it was merged with 2 surrounding townships (Brant and Greenock) to form the new municipality of Brockton (incorporated 1999).

Walkerton was settled in the mid-1850s and quickly developed as an important mill site and service centre for the surrounding area. In the 1860s it became the seat of the county's government. Walkerton developed a wide range of industrial and commercial services and has experienced steady growth throughout its history. It is now the administrative centre for Brockton. Local industries include a poultry processing plant, a battery packaging plant and medium and light manufacturing firms.

The Saugeen River is an important recreational attraction. The river is one of the province's best canoe routes and one of Canada's best fishing rivers. Annual trout and salmon runs can be observed at the fish ladder located on the east side of Walkerton.

In May 2000 the community made national headlines when its drinking water became contaminated with a dangerous strain of the bacteria Escherichia coli (E. Coli). Six people died and an estimated 2000 more became ill after being exposed to E. Coli in what is Canada's worst water sanitation incident.