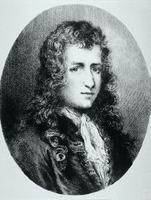 His one claim to fame is his descent of the Mississippi, upon which French claims to Louisiana were to be based (courtesy Library and Archives Canada/C-1843).
In 1658 La Salle began his novitiate in the Society of Jesus. Mental instability caused his release from his vows in 1667. He crossed to New France and 2 years later, falsely claiming to speak fluent Iroquois, he joined a Sulpician exploration expedition. Upon their encountering some Seneca he had to admit his total ignorance of their language and went off on his own. In 1673 he joined the coterie of Governor General Frontenac, with whose support he obtained letters of nobility. At the French Court, meanwhile, 2 clerics, Abbés Eusèbe Renaudot and Claude Bernou, to advance their own careers on La Salle's coattails, obtained a commission for him to explore the mid-west. In 1678 he began establishing a chain of trading posts, and then in 1682, with a small party of French and Indian guides, he descended the Mississippi to its mouth. On April 9 he claimed the entire region for Louis XIV.

Returning to France he fell in with a scheme of Bernou's to establish a base at the mouth of the Rio Grande for the conquest of Mexico. To make it seem more feasible to the king he falsified geography, situating the Mississippi over 600 miles west of its true course. Given command of the expedition, he displayed incompetence and paranoia. That, and his earlier duplicity, caused him to land in February 1685 at Matagorda Bay [Texas] which he claimed to be an outlet of the Mississippi. Most of the expedition's supplies having been lost and the Indians alienated, starvation loomed. In April 1686 La Salle set off with 20 men to seek help at Fort St-Louis-des-Illinois. Dissension in his party and at the base resulted in desertion and murder, and finally in the assassination of La Salle. The wonder is that his men had not killed him long before.

A romantic hero to 19th-century historians, La Salle was in fact a victim of his own incapacities. His one claim to fame is his descent of the Mississippi, upon which French claims to Louisiana were to be based.