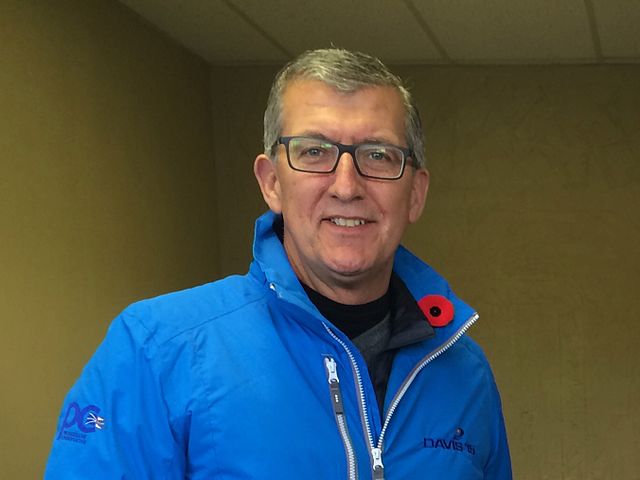 Davis joined the Royal Newfoundland Constabulary (RNC) in 1985 after graduating from the police cadet training program at Holland College in Charlottetown, Prince Edward Island. He served in the Corner Brook Division for five years before transferring to the RNC Headquarters in St. John’s. As a member of the Criminal Investigation Division, his assignments included Property Crimes, Major Crimes and the Child Abuse Sexual Assault Units.Davis became the RNC media relations officer in 2006. The same year, he was awarded a Police Exemplary Service Medal.

Davis was also involved in municipal politics during his career with the RNC. In 2001, he was elected as town councillor for Conception Bay South, part of the St. John’s Metropolitan Area. He was re-elected in 2005 and 2009 and served twice as deputy mayor.

In 2010, Davis was elected to the legislative assembly of Newfoundland and Labrador as the Progressive Conservative candidate for the riding of Topsail (later Topsail-Paradise), following the appointment of incumbent Elizabeth Marshall to the Canadian Senate. Davis was sworn in as a member of the House of Assembly in April and appointed legislative assistant for the Department of Municipal Affairs in July.

In May 2011, he publicly revealed that he had non-Hodgkin’s lymphoma and was undergoing cancer treatments, which would prevent his active campaigning in the provincial election that October. Despite the illness and disruption, he kept his seat with 68 percent of the vote. The Conservatives also won a large majority with 37 of 48 seats.

In October 2011, Premier Kathy Dunderdale chose Davis as the Minister of Service Newfoundland and Labrador and Minister Responsible for the Government Purchasing Agency. One year later, Davis became Minister Responsible for the Newfoundland and Labrador Housing Corporation and Minister of Transportation and Works, in which he tried to reduce costs of the province’s extensive ferry services.

In October 2013, Davis was appointed Minister of Child, Youth and Family Services. One of the most pressing issues he faced was the tragic case of children sniffing gasoline in the remote Innu community of Natuashish. The problem was a long-standing one for the community, which had been relocated from Davis Inlet in 2002. Davis and the Department of Child, Youth and Family Services put overwhelmed social workers on a tight two-week rotation, flying them in and out of the community. (As of 2015, gas sniffing was still a problem among the youth of Natuashish.) In May 2014, Davis was shuffled again, this time appointed as Minister of Health and Community Services and Minister Responsible for Aging and Seniors.

In the summer of 2014, Davis decided to run for leadership of the Progressive Conservative Party of Newfoundland and Labrador. In January, Premier Kathy Dunderdale had resigned as premier and leader of the PC Party, leaving finance minister Tom Marshall as premier and interim leader. Davis ran against John Ottenheimer and Steve Kent and won a third-ballot victory, with almost 52 percent of delegates.On 26 September 2014, Davis became the 12th premier of Newfoundland and Labrador.

By the time Davis was sworn in as premier, the Progressive Party was trailing the Liberals in public opinion polls. The party had been in power since 2003, when Danny Williams became premier. Eleven years later, voters seemed to want a change. Davis and the PC Party also faced economic challenges. Between September and November 2014, the price of oil — the province’s most precious commodity — dropped from US$92.45 to $67.39 a barrel. Given the new economic situation, Davis announced on 27 November 2014 that his government was imposing a freeze on discretionary spending and a “slowdown” in hiring.

The price of oil had dropped even further by April 2015, to US$60.81 a barrel. Later that month, the government released its 2015 budget, “Balancing Choices for a Promising Future,” which acknowledged the fiscal difficulty created by the drop in commodity prices. “The provincial government recognizes that the decline in oil prices has placed a strain on provincial revenues and we need to adjust our course to meet this new reality head-on,” stated the report. The budget, therefore, increased fees and taxes (including harmonized sales tax) and reduced expenditures.

By November 2015, oil had fallen to US$41.12 a barrel — a decline of over 50 percent since September 2014, when Davis won leadership of the Progressive Conservative Party. Overall, the Newfoundland and Labrador economy contracted by 2.2 percent in 2015, with declines in the oil and gas industries, as well as in residential and commercial construction. An RBC report estimated that the decline in oil prices had cost the provincial treasury an estimated 1.5 billion dollars in lost revenue.

With the government’s mandate almost at an end, Davis called an election for 30 November 2015 after barely a year in office. Economic decline and voter fatigue with Conservative rule were formidable obstacles to re-election for Davis and the PC Party. Asserting that “leadership is key,” he ran on a platform of “hard work, honesty and openness.” Davis cited “health, opportunity, people and the economy” as the party’s priorities, promising low tax rates for businesses, higher targets for the tourism industry, affordable childcare and financial help for first-time homebuyers.

Despite the Progressive Conservative promises, the party won only seven seats in the election, losing 30 seats and bringing an end to 12 years of Conservative rule. Dwight Ball’s Liberals won a landslide victory, although Davis retained his own seat by a wide margin.

Leader of the Opposition and Resignation

When Dwight Ball became premier, Davis took his place as leader of the Opposition. At the same time, senior Conservative officials called for a review of Davis’s leadership of the party. Davis had publicly vowed to stay on as leader through the next election (expected in 2019), but he changed course in October 2016 and asked the party to replace him as leader, citing “disquiet in the party.” He remained in that position until April 2018, when Ches Crosbie became party leader. Ball resigned as Leader of the Opposition in May 2018 and left provincial politics altogether in November 2018, when he resigned his seat in the House of Assembly.

On 23 September 2016, the Liberal government announced a formal inquiry into a tragic shooting that took place during Davis’s premiership. On Easter Sunday, 5 April 2015, a member of the premier’s security detail shot and killed Don Dunphy, a private citizen who was being questioned in his home about a message on his Twitter account that allegedly threatened the premier. No charges were laid at the time, and Davis and his office were not accused of any wrongdoing. The inquiry under Justice Leo Barry began in early 2017 and concluded in June 2017 that the Royal Newfoundland Constabulary officer had used “appropriate force.”