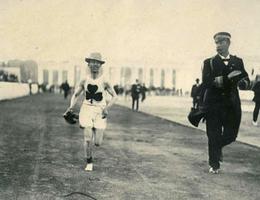 Marathon runner William Sherring at the 1906 Athens Olympics. Prince George of Greece was so impressed with Sherring that he ran alongside him for the last 50m of the race. His prize - a live goat (courtesy Canada's Sports Hall of Fame, www.sportshall.ca). 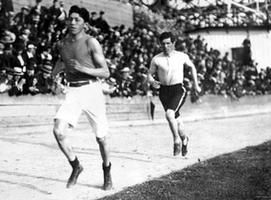 Longboat was one of the most celebrated athletes in the pre-WW I era (courtesy Canada's Sports Hall of Fame).
PreviousNext

Long-Distance Running refers to the running, both on and off the track, of distances longer than 3000 m. During the 1970s the upsurge of interest in long-distance running in Canada and elsewhere gained much of its impetus from the growing popularity of running as a form of exercise to improve FITNESS. Increased numbers of entries in clubs and organized races forced improvements in race categorization. The simple 4-division arrangement of men's and women's novice and men's and women's open was enlarged to include men's and women's masters, with 10-year age stages and under-18 age divisions. However, the 26-mile, 385-yard (42,195 m) marathon, for most, remained the golden challenge.

The marathon commemorates an event in ancient Greece; Pheidippides' run from the battlefield at Marathon to Athens (c 35 km) to announce victory. The first marathon race was in the 1896 Olympics; in the 1908 Olympics, the 26-mile distance from Windsor to London, Eng, came up a little short of the place at Windsor Castle from which the Royal Family was due to observe the start. This was corrected by adding 385 yards. By an administrative quirk the extra yards were adopted in the official distance in 1924.

The burgeoning interest in running has revived some defunct Canadian races. The Old Home Summer 10-Miler resurrected the Halifax Herald Modified Marathon, which was first run in 1907. It drew crowds until 1942, when WWII halted its continuation. In 1926, responding to his father's bribe of a trip to compete in the Boston Marathon, a 21-year-old miner from Sydney, NS, John C. Miles, ran the Modified and finished first. In Boston, Miles battled reigning Olympic champion Albin Stenroos and the race favourite, Bostonian Clarence DeMar, to win the 1926 Marathon in a time of 2:25:40, 4 minutes faster than the previous course record.

In 1987 North America's oldest race, the Hamilton "Around-the-Bay" race, had been run 77 times since its inception in 1894. The route, now standardized at 30 km, a little short of its original distance, launched the career of another great runner, Tom LONGBOAT. In 1906 Longboat defied gamblers' odds of 60-1 in winning the Hamilton race. He won the Boston Marathon in 1907 and, despite a US protest about his amateur status, competed for Canada in the marathon of the 1908 London Olympics, but did not finish.

Newer races offer unique challenges to racers. The Nunavut Midnight Sun Marathon is run on the few gravel roads surrounding the Hamlet of ARCTIC BAY, Nunavut some 720 km above the Arctic Circle. It takes place in July, when the sun never sets in the Arctic. Where this run, like many other races, is a test of individual endurance, the Banff-Jasper Relay is a test of team endurance. In 1982 the Toronto Olympic Club set a new course record of 16:47:45.

As well, there is a wide field of masters' competitors in every race. Men's master Bob Moore was 7th in the Vancouver International Marathon with a time of 2:24:10 and 10th in the Bermuda Marathon at 2:30:50. Women's master Diane Palmason became master Canadian and North American female champion when she was 3rd overall woman finisher in the 1981 Oakland marathon. World record holder Art Taylor had times in the 1982 North American and Canadian championships, 50+ age division, of 35:08 for 10 000 m and 17:04:08 for 5000 m.

The sport of running is taken up by thousands of Canadians each year, and it has become accessible via runners such as John STANTON, Canada's best-known expert on recreational running. With his business the Running Room, he has advocated for improved health and fitness through long-distance running, offering training on various distances from 5 km runs to full marathons.