Under section 96 of the Constitution Act, 1867, the federal government also appoints judges to the higher courts of the provinces and territories. They are sometimes referred to as “section 96 judges.” They sit in the superior trial courts and courts of appeal of the various provinces. The superior trial courts have different names in different provinces. For example, the Court of Queen’s Bench in Alberta; the Superior Court of Justice in Ontario; and the Supreme Court in Nova Scotia. (See also Court System of Canada.)

Provincial or municipal governments appoint judges of the provincial courts (the lower trial courts). They also appoint magistrates; justices of the peace; coroners; sheriffs and other officers of provincial courts. Provincially appointed judges deal with both provincial and federal laws and legislation.

Role of the Judiciary

Judges do not legislate or enforce the law; that is the role of the legislative and executive branches of government and its departments and agencies. The role of judges is to interpret and apply the law in various cases. Judges interpret the intent and application of written statutes passed by Parliament and the provincial legislatures. They also develop and apply the common law.

Whether judges preside over criminal prosecutions or civil lawsuits, they must serve as impartial arbiters. The courts’ impartiality flows from the essential feature of our judicial system; that it is independent from the executive or legislative branches of the government. Judges are dependent on the other branches for their appointment, removal, and for the payment of their salaries. But the quality of justice in Canada can only be maintained with an independent judiciary.

The notion of judicial independence has at times been tested. There have been instances where provincial court judges have refused to rule on various cases. They claimed they were not independent of the provincial government, which sets their salaries and working conditions. The Supreme Court of Canada (in the Valente case) held that the three main principles of an independent judiciary are security of tenure; financial security; and independence in court administration where those matters bear directly on the judicial decision-making process. There have been several cases where wage cutbacks for provincial court judges have been challenged as an interference with their independence, on the grounds that it endangers their financial security. (See also Judges Salaries (Reference).)

In 1981 and again in 1995, the Canadian Judicial Council released commissioned reports on the state of judicial independence in Canada. The reports are Masters in Their Own House (1981), and A Place Apart: Judicial Independence and Accountability in Canada (1995).

The Constitution Act, 1867 and the federal Judges Act provide for the appointment, removal, retirement and remuneration (including matters such as pensions) of federally appointed judges. Most federal appointments are made by the governor general on the advice of the minister of justice and the cabinet.

Federal appointments to the superior and senior courts in the provinces and territories are made by the federal minister of justice. He or she acts on the advice of provincial or territorial judicial advisory committees. They review, rate, and suggest appointments. The committees are administered by the Commissioner for Federal Judicial Affairs. Their office answers to the minister of justice.

All candidates for federal appointments must have been lawyers for at least 10 years. They must also be qualified to practice law in the jurisdiction where they would be appointed.

Provincial appointments are made by the attorney general or minister of justice of the province or territory. They do so after consultation with cabinet. In most provinces, the attorney general appoints a judge only after a review of the application by a provincial judicial council. This council contains a broad representation of members of the legal profession, the judiciary and the public. It is similar to the federal judicial advisory committees.

Eligibility rules for prospective judges vary among provinces. In some provinces, someone must have been a member of the legal bar for at least five years; in others, they need not even be lawyers, although lawyers are almost always appointed. Many lower-level members of the judiciary, such as police magistrates, are retired members of national or local police forces.

With both federal and provincial appointments, there are few requirements for judges to have expertise in a particular area of the law. This leads to examples where judges in criminal courts have little or no experience working as criminal prosecutors or criminal defence lawyers; or to examples where judges presiding over civil litigation cases have no experience as civil litigation lawyers. Some observers have called for changes requiring judges to have the appropriate legal background to preside over related cases.

Since the 1980s, the composition of the judiciary has changed with the appointment of more women and younger people to the bench. In recent years, there have also been calls by lawyers and legal organizations to increase the number of visible minorities on the bench. These would include Indigenous judges and Black judges. (See also Prejudice and Discrimination in Canada.)

So far, there has been some progress on making the judiciary more gender balanced. (See also Gender Equality; Gender Equity.) As of 2017, four out of nine Supreme Court of Canada justices were women; including the chief justice, Beverley McLachlin. Meanwhile the judges of the Federal Court and Federal Court of Appeal were roughly one-third female. More than a third of all federally and provincially appointed judges on the remaining courts were female as of 2017.

However, the judiciary remains a White bastion. As of 2016, there were no visible minorities or Indigenous judges on the Supreme Court or the Federal Court of Appeal. There were only a few Indigenous judges on the Federal Court. The same held true for all levels of the federally and provincially appointed provincial level courts. There were only a handful of Indigenous and visible minority judges presiding over the courts where the vast majority of the country's judicial work takes place. This is despite the fact that about 20 per cent of Canada’s population is non-White. 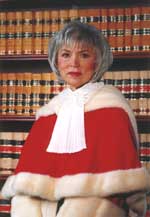 Beverley McLachlin, the first female chief justice of the Supreme Court of Canada .

Judges are required to maintain good behaviour to keep their positions. Federally appointed judges can be removed only by Parliament. This would happen upon the recommendation of the minister of justice, following a review by the Canadian Judicial Council. Under the federal Judges Act, matters not constituting good behaviour are given broad definition to include conditions such as a judge becoming senile.

The Canadian Judicial Council was created under the Judges Act. It is made up of the various federally appointed chief justices and associate chief justices of the superior courts; as well as the senior judges of the territorial courts. It is chaired by the Chief Justice of Canada. The Council provides continuing education for federally appointed judges. It makes recommendations to the minister of justice following the investigation and review of judges' conduct; or of complaints against them. It also recommends, when appropriate, a judge's removal.

As of 2017, the Council has only twice recommended the removal of a judge. Parliament has never had to take the next step of removing a judge. Those facing removal resigned instead.

Politics and the Judiciary

The reasons for judicial appointments have always been surrounded with secrecy. This fuels the belief that political considerations influence the appointments. It is widely held that to become a judge, it helps to be politically connected with the political party in power; or that some judges get their positions and promotions as patronage favours.

The present process, however, does not guarantee that appointments are immune from politics. This is because final appointments are made (from a list of reviewed and approved candidates) by the minister of justice (or, in some instances, by the prime minister) after consultation with cabinet.

Generally, the appointment process is far less politicized now than in the past. This is especially true of appointments to the Supreme Court. On the other hand, other non-political factors have entered the appointment process (such as gender, language, geography, and ethnicity) to ensure that the judiciary consists of qualified persons who reflect the nature of Canadian society.