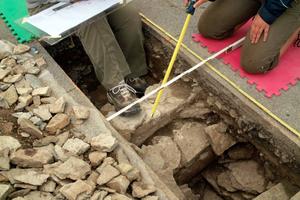 Fort Henry, KINGSTON, Ont, was originally built during the WAR OF 1812 on Point Henry, beside Lake Ontario, to guard the outlet to the St Lawrence River and the Kingston Navy Yards. The strategic importance of the location increased after the completion of the RIDEAU CANAL, which provided a military supply route between Montréal, Bytown [Ottawa] and Kingston; the fortress was rebuilt between 1832 and 1837, the better to defend the end of the canal most vulnerable to American attack. It was the principal fortress of UPPER CANADA (and also the largest), garrisoned by troops of the British army until 1870 and then by units of the Canadian Militia until 1891, when the fort was abandoned as a defensive structure.

In both world wars it housed PRISONERS OF WAR. In 1936 it was leased to the Ontario government, which had it restored as a historic park as part of a Great Depression works project. It was opened to the public in 1938 and again in 1948 after its second duty as an INTERNMENT camp.

Today, Fort Henry, a major attraction in a city that boasts many fine old buildings, is restored to its mid-1860 appearance, and houses refurnished buildings and a museum of military arms and equipment. During the summer the "Fort Henry Guard" demonstrates precision drill manoeuvres. Parks Canada manages Fort Henry as a national historic site (designated in 1923) and the Ontario government operates the site.