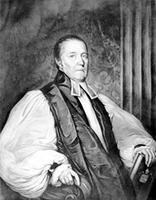 Strachan sought special status for the Church of England and became the centre of controversy as he defended Anglican monopoly of the Clergy Reserves and dominance in politics and education (courtesy Metropolitan Toronto Reference Library/T15000).

Clergy Reserves, one-seventh of the public lands of Upper and Lower Canada, reserved by the 1791 Constitutional Act for the maintenance of a "Protestant clergy," a phrase intended to apply to the Church of England alone. The reserves excited controversy, especially in UC, although for many years they brought no income since settlers could obtain other lands free. When free land grants ceased in the 1820s, Bishop John Strachan decided the Church of England should sell rather than lease its lands, as it had since 1819. In 1827, having blocked a transfer to the Canada Company, he persuaded Britain to authorize sales of one-quarter of the reserves, but not to exceed 100 000 acres (40 468 ha) per year.

An increasingly powerful reform movement, including many denominational rivals, opposed Strachan's plans. In 1824 the legislature upheld the claim of the Church of Scotland to a share of the reserves. Later the debate over "co-establishment" of the Church of Scotland became an assault on the idea of establishment itself (see Anglicanism). In 1828 a Select Committee of the Assembly and the Canada Committee of the British Commons criticized church establishment and recommended dividing profits from reserves among the Protestant denominations. In 1840 the Assembly accepted a bill dividing half the proceeds between the C of E and the C of S, leaving the remainder to other denominations. Still, by the early 1850s secularization of the reserves was being widely demanded. In late 1854 the MacNab-Morin coalition of UC conservatives and LC reformers passed a bill to transfer reserve-sale proceeds to the Municipalities Funds of UC and LC; to pay present clerical incumbents their stipends for life; and to allow them to cede their life claims to their respective churches, which could commute the total into 6% annuities.

Commutation was attacked, but most wished to settle the controversy that had bedevilled religious and political life for 3 decades. The clergy reserves were secularized not because they were obstacles to settlement, but because the policy of church establishment they represented was unacceptable in religiously heterogeneous UC.