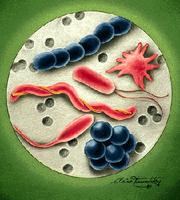 Cocci, in the chain shape, simple rod bacillus with its flagella; cocci in a cubicoidal arrangement; spirochite with its filament; vibrio with a stalk; and bacterium with numerous appendages (artwork by Claire Tremblay).

As prokaryotes [Gk, "before nucleus"], bacteria are characterized by the organization of deoxyribonucleic acid (DNA, containing genetic material) into a singular, circular chromosome not bounded by a membrane; and into smaller circular structures (plasmids); small ribosomes (particles active in protein synthesis) uniformly distributed throughout the cytoplasm; and the absence of membrane-bound organelles. The cell shape of most bacteria is spherical or ovoid (coccus), rodlike (bacillus) or spiral (spirillum). The cells generally range in width from 0.2-5 µm, and in length up to 150 µm, though species with larger cells are known.

Many bacteria do not move independently, but some are motile through the action of flagella and others glide over solid surfaces. Cell division occurs by binary fission, which yields 2 identical cells; the daughter cells may separate, or remain attached to form a chain or filament.

A few bacteria reproduce by budding or by formation of conidia (asexual spores). In response to unfavourable environmental conditions, some bacteria form an endospore (thick-walled structure) within the cell, which is resistant to heat, drying and disinfectants, and which can germinate to form another vegetative cell when conditions improve.

Some types of bacteria are photosynthetic, but most are not. Because they release oxygen, certain photosynthetic bacteria (ie, Cyanobacteria, see Blue-green algae) are thought to have been responsible for the initial production of oxygen in Earth's primitive atmosphere.

Among nonphotosynthetic bacteria, aerobes possess energy-yielding systems based on oxygen-dependent oxidation of substrates, such as occurs in higher life forms. Many use free oxygen to convert organic matter into carbon dioxide and water, thus releasing energy for growth and reproduction.

Some are capable of oxidizing sulphur, hydrogen and nitrogen, processes which are unique to bacteria. Some anaerobic bacteria carry out photosynthesis; others employ processes of fermentation or anaerobic respiration to produce energy.

Facultatively, bacteria can grow aerobically or anaerobically, depending on nutritional and environmental conditions. Carbon for cell growth may be obtained from organic matter or carbon dioxide, and nitrogen from many inorganic and organic sources, including free nitrogen in the atmosphere.

Because of their diverse metabolism, bacteria are found everywhere in our environment, including places where higher life forms cannot exist. Archaea [Gk, "ancient bacteria"] inhabit stressed environments (eg, very high temperature [80°-110°C] or salinity [25-30% salt], highly anaerobic), such as probably existed on the prehistoric Earth. Others thrive in acid soils and waters; others, in saline environments, high-pressure systems like deep ocean waters, cold arctic waters and soils, thermal hot pools, or in anaerobic environments such as swamps, aquatic sediments and the digestive tracts of animals.

Bacteria are involved in cycling elements such as carbon, nitrogen, phosphorus and sulphur, all of which are essential for the maintenance of life. In the carbon cycle, for example, carbon is fixed into organic matter by plants and algae, and these can be consumed by animals. For photosynthesis to continue, excretory products and plant and animal remains must be decomposed (mineralized) to release carbon dioxide. Both aerobic and anaerobic bacteria play key roles in this process.

Bacteria are the biological agents responsible for recycling nutrients found in domestic, agricultural and industrial wastes. Methane gas, an important energy source with domestic and industrial applications, is a product of the mineralization by certain Archaea.

Some bacteria are capable of fixing nitrogen while free-living; others fix nitrogen symbiotically in association with a plant. The latter process is widely distributed in legumes; the Rhizobium bacteria involved are produced commercially, and the legume seed is inoculated before sowing to increase the amount of nitrogen fixed.

Bacteria capable of producing sulphuric acid are used in mining copper and uranium; those capable of growing on hydrocarbons are exploited in the clean-up of oil spills. Bacteria can now be genetically engineered to degrade other environmental pollutants such as herbicides and insecticides.

In the food industry, bacteria are used in the production of cheeses, yogurt, vinegar and sauerkraut. The amino acids methionine and lysine are produced from bacteria and are added to cereals and rice to improve nutritional value. Bacterial enzymes are used to produce high fructose syrups (sweeteners) from starch; the artificial sweetener aspartame and glutamic acid are used for conversion to monosodium glutamate (a flavour-enhancer). The anaerobic clostridia have been used to produce industrially important solvents (eg, acetone). Bacteria causing diseases of insects are used for the biological control of insect infestations (see Insect pests).

Bacteria are used to produce medically important compounds like vaccines, vitamins (eg, riboflavin, vitamin B12), antibiotics (eg, polymyxin and bacitracin) and steroids. Genetic engineering techniques have made it possible to use the fast-growing Escherichia coli to produce insulin, interferon, human growth hormone, and other compounds produced by eukaryotic cells (true nucleus) and not normally produced by prokaryotes. The bacterium Agrobacterium tumefaciens, which causes the plant disease crown gall, is extensively used in plant biotechnology as a vector to introduce new genes into plants.

Bacteria are involved in deterioration of building materials, in spoilage of food and in dental caries. Bacterial colonization and the production of acids accelerate corrosion of metals and the disintegration of concrete. Hundreds of millions of dollars are spent annually on biocides in an attempt to control such activities.

Approximately 10% of known species are capable of causing plant or animal diseases. Large losses in productivity occur because of bacterial wilt of cultivated plants; other bacteria cause the soft rot of vegetables.

The pasteurization process, improved sanitary procedures for the disposal of human and animal waste, and improved hygiene in the handling of water and food supplies have significantly decreased the incidence of some bacterial diseases. More virulent bacterial infections have been brought under control by intensive vaccination programs and by the use of antibiotics.