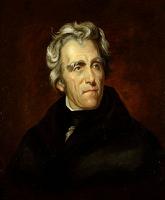 Andrew Jackson, American soldier and statesman, 7th president of the United States (b at Waxhaw, SC, 15 Mar 1767; d at Nashville, Ten, 8 Jun 1845). Andrew Jackson was a distinguished general of the War of 1812 and his conduct, particularly at the Battle of New Orleans (1815), established him as an American hero. The fiery Jackson would turn that heroic status into a successful and controversial career in politics when he became the president of the United States.

Born in the backwoods of the Carolinas, Jackson was the son of Scottish Irish colonists. At the young age of 13, Jackson served in a local militia as a courier during the American Revolution. It was a dangerous job. Jackson and his brother were captured and suffered great deprivations at the hands of British soldiers. By war's end, Jackson's family had all died from various ailments associated with the war. All of these events had burned in Jackson a deep hatred for the British, whom he blamed for making him an orphan at 14.

Jackson made his way through adolescence and adulthood by working a variety of jobs, including as a country lawyer despite his rudimentary education, before becoming a senator for Tennessee. He soon served as a judge of the Tennessee Supreme Court. Jackson was also a natural soldier, and by 1801 he was serving with the Tennessee militia as a colonel.

During the War of 1812, Jackson saw his star in ascension based on two key victories. The first (August 1813) was at the Fort Mims Massacre, where the "Red Stick" faction of the Muscogee (Creek) nation had been directed by the Shawnee war chief Tecumseh to raid and kill the populace of Fort Mims, Alabama, including civilians, military personnel, and "mixed blood" Muscogee peoples. Jackson and his militia took part in the following Creek War, a conflict that ran simultaneously within the War of 1812. Jackson and others handed the Muscogee a punishing defeat, secured vast stores of land, and instituted the Treaty of Fort Jackson. Jackson earned the rank of major general for his daring, tough, and difficult campaign, in which such notable American folk heroes as Sam Houston and Davy Crockett served under his command.

But Jackson's military career was forever branded by his victory in the Battle of New Orleans. As British forces attempted a combined land and naval assault, Jackson took command of the city's defences. The Americans had expected a larger fleet and prepared for a hard fight against 25 000 British soldiers. Some predicted defeat. Not Jackson. Summoning as many militiamen as he could, he set to work preparing a strong defence against the British operation. His reputation as a tough but fair commander who was not afraid to fight earned him the nickname "Old Hickory." With 5000 soldiers, Jackson repulsed a larger British force of 7500. New Orleans was a decisive American victory. Thousands of British were either killed or injured; three of their generals were killed. American casualties and deaths were minimal. And the roar of victory was loud.

Jackson became an American hero for his conduct, even though there was no military advantage to his victory; the war had actually ended on 24 December with the signing of the Treaty of Ghent. But as political capital for Jackson, the Battle of New Orleans was pure gold. The last major engagement of the War of 1812 was an impressive American victory that was celebrated as a near-holiday for years after.

Jackson continued his march into a throng of popular support during the Seminole Wars before reaching the apex of his career when he was elected president. The backwoods tough always claimed he was "born for the storm" of life in America. He was the last serving US president to have cut his teeth on the American Revolution.